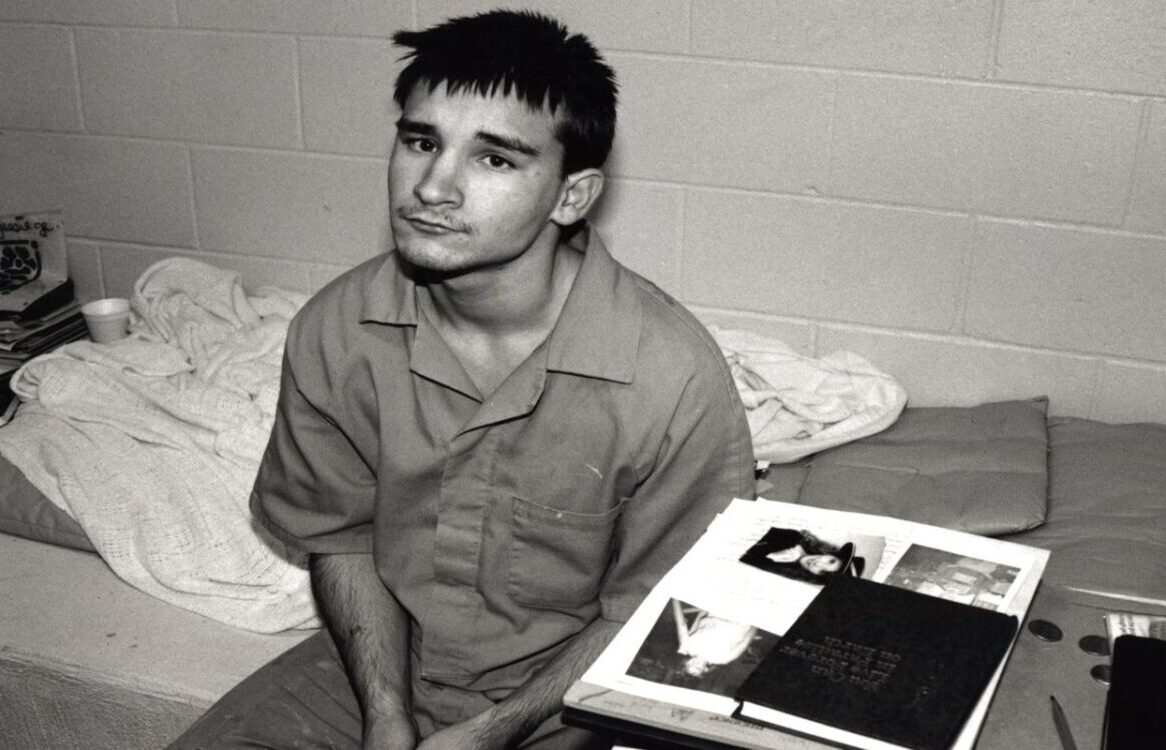 I have done the same with this statement as I did with one and three; show where IMO Jessie is being led or fed answers.  I’ve also left in my notations where there are inconsistencies, etc.  If I’ve missed any, please feel free to point them out and I’ll edit them in.

[Note: This is a transcription of the taped second statement of Jessie Misskelley, Jr. regarding the murder of Chris Byers, Steve Branch and Michael Moore]

[*NOTE: The following is the transcript of the second interview with Jessie Misskelley, Jr. taken later the same day]

NOTE: THIS INTERVIEW WAS TAPE RECORDED

Gitchell: Jessie, uh, when when you got with the boys and with Jason Baldwin when you three were in the woods and then little boys come up, about what time was it? When the boys come up to the woods?

Gitchell: Know, did you have your watch on at the time?

Gitchell: You didn’t have your watch on?

Gitchell: Uh, alright you told me earlier around 7 or 8, which time is it?

Jessie: It was starting to get dark.

(In the first statement Jessie claims to have arrived in the woods at 9 a.m.  He also stated the children skipped school and that is how they were there at that hour (known to be false). Now he has totally changed when he arrived.  Here he also starts at 5 or 6 and then goes on to say 7 or 8)

Jessie: I remember it was starting to get dark.

Gitchell: Ok, well that clears it up. I didn’t know, that’s what I was wondering, was it getting dark or what.

Jessie: We got up there at 6:00 and the boys come up and it was starting to get dark.

Gitchell: Ok, so you and Jason and Baldwin uh, Damien you all got there right at 6.

Gitchell: Is that a normal time that you all meet at 6?

Gitchell: Ok, when you do your cult stuff does 6 mean something, I mean is that a time you normally do meet?

Gitchell: Ok, so you all met out there at 6 and then the boys come

up about what time?

(Jessie is changing back and forth, back and forth between and six and seven.  This is very significant, as sundown on this date was recorded at approximately 7:49 p.m. and Jessie is stating that it was getting dark around 6:00 p.m. These time changes are also very important as you will see below, Jessie was seen at Highland Trailer Park as late as 6:30.)

Gitchell: About 7:00, Ok. So you all were out there with the boys and all this stuff going on and until you noticed it starting getting dark. Is that correct?

(Jessie has an alibi: Charles Ashley gave a statement that he saw Jessie at High Land Trailer Park that evening. The police were called to the park after there was an altercation.  Later the police records were checked and the police were at High Land at 6:30; Jessie was seen at High Land as late as 6:30.  Ashley also states that Jessie says he is leaving to go to wrestling in Dyess that night.  A neighbor, Jim McNease woukld testify at Jessie’s trial that he saw Jessie that evening at HighLand with a black wrestler’s mask in hand.)

Gitchell: Ok, now are you sure about that?

Gitchell: Ok, uh, Ok, hold on just a minute. (Pause) Ok Jessie uh, I asked you about your clothing and you said that uh, what what were you wearing?

Jessie: I was wearing uh, blue jeans, and a white shirt with some kind of basketball deal on it. Some tennis shoes Adidas.

Jessie: It was a white shirt with a basketball on around it.

Gitchell: Is it a shirt like you got on now?

Gitchell: What kind of shirt is it like you have on now? That is what, a t-shirt?

Gitchell: Ok, so you had a white t-shirt with a basketball design on it.

Gitchell: Ok, uh, what about shoes, what kind of shoes did you have on?

Gitchell: And who has those shoes now?

Gitchell: And how old is Buddy?

Gitchell: Why does he have your shoes?

Jessie: We went we was coming home one day and it was raining and he didn’t have nothing else to wear so he put on one of my shoes.

Gitchell: Ok, and where does he live at?

Jessie: By, uh the church.

Gitchell: Is there a street or anything?

Jessie: It is a street but it ain’t got no names on it though.

Gitchell: What street is the church on?

Gitchell: Off of Cherry Street?

Gitchell: Ok, are there any vehicles around close by that I could recognize that trailer?

Gitchell: Alright, who tied the boys up?

Gitchell: Did Damien just tie them all up or did anyone help Damien or

(*In the first statement, Jessie claims the boys were tied up while he was chasing down Michael; he did not see it.  Now he is stating that he saw Damien do it.)

Gitchell: Ok, and what did they use to tie them up?

Gitchell: Ok, what color was the rope?

Gitchell: Did you ever see the boys in the water?

Jessie: Uh, yeah, down by the water.

Gitchell: Alright, how did the boys get into the water?

Jessie: They pulled them there into the water.

Gitchell: Alright, when you say they who is it that pulled them into the water?

Gitchell: Do you wear a belt?

Gitchell: Does Jason where a belt?

Gitchell: Does Damien wear a belt?

Gitchell: What kind of belt does he wear?

Jessie: A black leather belt with uh, beads uh, like little beads around it.

Gitchell: With beads around it?

Gitchell: Ok, about how thick is the belt?

Gitchell: Now, do you know what 4 inches looks like?

Gitchell: Ok, I don’t think that’s quite 4 inches, but uh, probably about 3 something like that.

(Why this line of questioning?  There were contusions and small slit like cuts on Christopher Byers buttocks.  See John Mark Byers’ statement of 5-19-93 where he admits to giving Christopher a whipping with a belt the afternoon he disappeared)

Gitchell: Which, which boys were raped?

Jessie: Uh, Byers and the Branch.

(There was no evidence any of the children were raped)

Gitchell: Ok, did you, did you see the Moore boy, was he raped?

Gitchell: Do you know which one raped which boy, or how did that happen?

Gitchell: Alright, give that to me again now.

(More discussion of rape, and again, there was no evidence of sodomy)

Gitchell: Did anyone have oral sex with the boys?

Gitchell: How many of them did they do that to?

Gitchell: How did they keep the boys quiet?

Jessie: Put their hands over their mouths.

Gitchell: Did they do anything else other than put their hands over their mouths? How did they finally keep them from being quiet, cause the boys bound to have been hollering?

Gitchell: Ok, did they do anything else to them to make them be quiet?

Jessie: They stuck their thang in their mouth.

Gitchell: Ok, did they, were they hitting them before that or afterwards?

Jessie: Before and after, just trying to keep them off of them.

Gitchell: Just all of the time?

Jessie: Just trying to keep Jason and Damien off of them.

(No wounds of any kind were ever seen on Damien, Jason, or Jessie.  In fact the day after the bodies were found, police went to question Damien Echols after a tip from a Juvenile Officer, and took a picture of Damien without a shirt on.  There were no marks of any kind on him.)

Gitchell: Now they put their, whose shirts did they put in their mouth?

Gitchell: Ok, alright hold on just a minute, -pause- Let me ask you something else, Jessie, I’m sorry, I keep coming back and forth, but I got people that want me to ask you some other questions, uh talking about oral sex, did you see, you know we had talked earlier about how Jason and uh Damien do each other, have sex with each other did they, did they have oral sex on the boys?

Gitchell: Ok, but did, did anyone go down on the boys and maybe suck theirs or something?

Jessie: Not that, I didn’t see nothing neither one of them do that.

Gitchell: You didn’t see that?

Gitchell: Ok, did, did they pinch their penis in anyway or were rough with it or anything like that?

Jessie: I didn’t see nothing like that, not rough with them, I just seen um

Gitchell: You didn’t see anyone go down on the boys?

Gitchell: Are you sure?

Gitchell: That Coke was kind of cold huh?

Gitchell: I tell ya it tasted pretty good to me though.

Gitchell: Um, Jessie when, now the boys hands were tied up right?

Gitchell: How did, how did, they force these boys to have oral sex on them? How did they have a hold of them?

Jessie: One of them had holding them by the arms while the other one got behind them and stuff.

Gitchell: Did he ever hold him up here or

Jessie: Uh, the one that was holding him up there at the front grabbing him by his headlock.

Gitchell: Had him in a headlock? Did he have him any other way?

Jessie: He was holding him like this by his head like this and stuff (Note: was indicating the victims being held by their ears)

Gitchell: Could he have been holding him up here like that?

Jessie: I was too far away he was holding him up here by his head like this (Note: showed the same as above)

(Jessie describes the child being held in a headlock.  This is a wrestling term.  Jessie maintains throughout all statements that he was to attend wrestling this night.  Gitchell makes the suggestion that it is the ears alone that he is referring to; that is not what a headlock is, and Jessie was an avid wrestling fan, frequently traveling to the next town to wrestle himself, and would know what a headlock looked like)

Jessie: And he was pulling him.

Gitchell: Ok, so who was one of them doing that or both of them was doing it? Was Jason?

Jessie: Jason was holding him while Damien did it and then they took turns.

Gitchell: So, they both did it to all three of these boys?

Jessie: Just them two as far as I know.

Gitchell: Just the two of them?

Gitchell: But they, they both Jason and Damien did it to two of the boys and they took turns?

Gitchell: And they would hold, tell me again about their hands on, I mean I know you’re, you’re holding it up here.

Jessie: It was up here by their heads and stuff and was just pulling and stuff.

Gitchell: Alright, so they are up here, had their hands

Jessie: By their ears and pulling them and stuff.

Gitchell: Alright, Ok, say, say that again for me now.

(Now Jessie changes his mind and is saying “ears” instead of “headlock”.  The reason for this line of questioning would have been the fact that there was slight bruising found on one or more of the boys’ ears during the autopsy.)

Jessie: Hold them by their head, by ears and pulling